In a significant breakthrough, the short-term deficit of vitamin A while the lungs are being formed in the baby during pregnancy has been linked to asthma later in life. A team of Columbia University researchers has found the first direct evidence of a link between prenatal vitamin A deficiency and postnatal airway hyperresponsiveness – a hallmark of asthma.

The vitamin A deficiency can cause profound changes in the smooth muscle that surrounds the airways – causing the adult lungs to respond to environmental or pharmacological stimuli with excessive narrowing of airways, say Columbia University Medical Center (CUMC) investigators led by Wellington V. Cardoso. 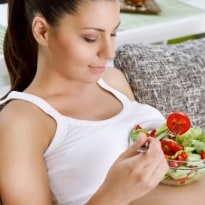 “Researchers have long wondered what makes some people more susceptible than others to developing asthma symptoms when exposed to the same stimulus,” added Cardoso, faculty member in the division of pulmonary allergy clinical care medicine. Our study suggests that the presence of structural and functional abnormalities in the lungs due to vitamin A deficiency during development is an important and under-appreciated factor in this susceptibility, he stressed.

Previous studies had shown that retinoic acid (RA) – the active metabolite of vitamin A – is essential for normal lung development. The researchers used a mouse model in which they could control when and in what amount vitamin A would reach the developing foetus through maternal diet.

They timed the vitamin A deficiency to the middle of gestation, coinciding with the period of formation of the airway tree in the foetus. Foetuses that were deprived of vitamin A were found to have excess smooth muscle in the airways, compared with control groups.

In a subsequent experiment, the mice were again deprived of vitamin A during the same developmental stage, but returned to a normal diet after that stage and until adulthood. “When the animals reached adulthood, they appeared normal; they had no problems typically associated with vitamin A deficiency,” explained Cardoso. However, pulmonary function tests showed that their lungs were clearly not normal.

When the mice were challenged with methacholine, a chemical that causes the airway to contract, their response was significantly more severe than that of controls. The findings underscore the importance of sufficient vitamin A in the diet, which remains a significant challenge in developing countries, including India.

A new study has found taking milk during pregnancy benefits children well into their early...More

Flu Shot During Pregnancy May Reduce Risk of Stillbirths

Flu vaccination during pregnancy may reduce the risk of stillbirth, a new study reports. Researchers...More