A new study has found taking milk during pregnancy benefits children well into their early adulthood. It helps the children gain better height than those whose mothers did not take it adequately.

Earlier studies said babies tend to weigh more and grow more quickly if expectant mothers drink milk. But the new study has said children born to women who drank milk during pregnancy are more likely to be tall in their teenage. 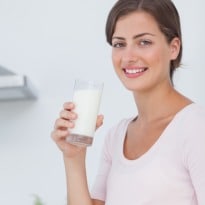 The study’s results, published in the European Journal of Clinical Nutrition, show teenagers of both genders were generally taller if their mothers took more than 150 millilitres – roughly a quarter of a pint of milk – a day during the pregnancy, compared to children born to women who drank less than that quantity, Daily Mail reported.

The latest finding was reached after a team of scientists, who tracked babies born in the late ’80s, found their height during adolescence was directly related to how much milk their mothers consumed when they were in the womb.

Nutrition experts from Iceland, Denmark and the US wanted to examine if the benefits seen in the early stages of life from milk were extended into later years.

They tracked babies born to 809 women in Denmark in 1988 and 1989 by monitoring how much milk the women had consumed during pregnancy. The babies were measured for weight and birth length and then followed up again almost 20 years later.

Earlier this year, British scientists found pregnant women could boost their babies’ IQ by drinking more milk because it is rich in iodine.

A Diet Rich in Vitamin A Essential During Pregnancy

In a significant breakthrough, the short-term deficit of vitamin A while the lungs are being...More

Flu Shot During Pregnancy May Reduce Risk of Stillbirths

Flu vaccination during pregnancy may reduce the risk of stillbirth, a new study reports. Researchers...More