If you tell your child’s pediatrician that your child is having trouble sleeping, she might respond by asking you how well you sleep yourself.

A team of Finnish researchers found that parents with poor sleep quality tended to report more sleep-related difficulties in their children than parents who slept well. But when the researchers looked at an objective monitor of the children’s sleep, using a bracelet similar to a commercial fitness tracker that monitored movement acceleration, a measure of sleep quality, they found that the parents were often reporting sleep problems in their children that didn’t seem to be there. 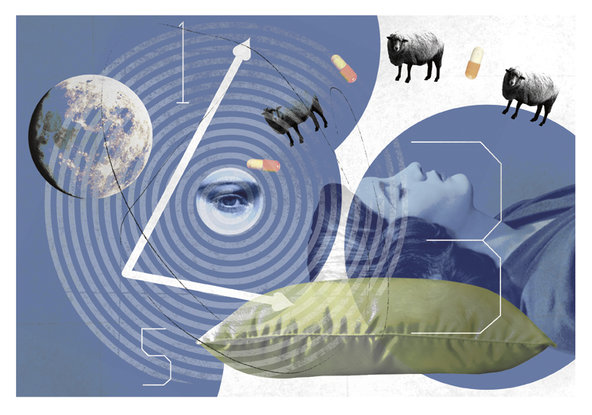 “The only thing that was associated with sleeping problems, as reported by the parents, was their own reported sleeping problems,” said Marko Elovainio, a professor of psychology at the University of Helsinki and one of the authors of the study, which was published this month in the journal Pediatrics.

The study was relatively small, involving 100 families with children aged 2 to 6. But the findings suggest that parents’ report of sleep problems in their children are influenced by their own attitudes and behaviors surrounding sleep.

The researchers were inspired to do their study, in part, by researchshowing that mothers with depression over-report behavioral problems in their children, seeing issues that teachers do not see. In pediatrics, the researchers noted, doctors rely heavily on parental reports for information — and if that information is biased by a parent’s own experience, diagnosis becomes more difficult.

“Sleep is a good measure of stress,” said Dr. Elovaino, and it is one tool doctors use to evaluate how much stress a child is experiencing. But when making a diagnosis involving a child’s sleeping patterns, “we can’t rely on reports of parents. We need to use more objective measures.” One reason to look at sleep in this context, he said, is that unlike other possible markers of stress, it can be measured objectively.

But an accurate evaluation of sleep quality should also include an individual’s subjective perception of tiredness in the morning and throughout the day, said Candice A. Alfano, the director of the Sleep and Anxiety Center of Houston and an associate professor at the University of Houston. She and her colleagues published research in 2015 describing a similar disconnect between perceived sleep difficulties and measurable sleep. Although both anxious children and their parents reported greater sleep difficulties than children and parents with lower levels of anxiety, there was no significant difference between the measured sleep patterns of the two groups.

“Children who are anxious at night often attempt to avoid bed, ask parents to sleep with them, and complain of nightmares,” Dr. Alfano said. Those are observable behaviors for parents, but they might not be reflected in the quality of a child’s sleep once sleep is achieved, or how that child feels about sleep.

In general, said Jamie Howard, a clinical psychologist at the Child Mind Institute, a nonprofit group that deals with pediatric mental health issues, parents are better reporters of children’s external behaviors, while children are better reporters of their internal emotions. “If the parent is saying that a child seems sad or depressed, we listen,” she said. But it’s also important to talk to the child as well, in order to understand “how much is the parent’s perception and how much is actually what the child is experiencing.”

Sleep, especially when considered as a measure of stress or anxiety, sits somewhere between the external and the internal. Knowing that parents may be misperceiving a child’s sleep experience can remind practitioners to look further than a parent’s assessment of a child’s other emotional symptoms. “When we work with children, we’re really working with the whole family,” Dr. Howard said. “You have to always remember that reports of the children are coming through the filter of the parents.”

Placing the proper weight on the influence of that “filter” is a challenge for both professionals and parents, many of whom are well aware that they may see their children through a distorted lens. “I have a family history of mental illness,” says Judy Batalion, who wrote about her own anxieties and her mother’s hoarding in “White Walls: a Memoir about Motherhood, Daughterhood and the Mess in Between.” “I’m a professional worrier.”

Ms. Batalion is aware that she’s “hypervigilant” about the kinds of psychological issues she has seen in family members, and she’s also aware that she can take it too far. “When my older daughter was a toddler, there was a period where she just wanted bags, and to put stuff in bags, colored disposable spoons and straws.” The bags reminded Ms. Batalion of her mother’s bags. “I had to tell myself, she’s a toddler, not a hoarder.”

A good practitioner, experts agree, should never dismiss a parent’s concerns. Even in cases in which there is no objectively measurable sleep problem, a parent or child’s anxiety about sleep may itself be a problem. Similarly, notes Dr. Howard, if a parent perceives a child as being anxious, and the child herself isn’t feeling that emotion, the child still has to deal with a parent who thinks she’s anxious.

“Parents do such a good job of observing their children’s behaviors,” she said, but since they can’t always know what’s inside a child’s head, “they don’t know exactly what they’re thinking or feeling.”

No Comments on "Parents With Sleep Problems Think Their Children Have Them, Too"